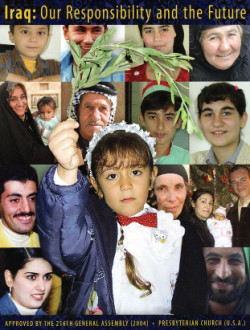 This report will determine procedures and program for the ministry divisions and staff of the General Assembly and its Council. It is recommended for consideration and study by other governing bodies (sessions, presbyteries, and synods). This report is commended to the free Christian conscience of all congregations and the members of the Presbyterian Church (U.S.A.) for prayerful study, dialogue, and action.

The military action taken against Iraq is examined in light of just war principles and other principles of conscience. Among other things, the resolution reaffirms our solidarity with Iraqi Christians and their churches, calls for pastoral support for U.S. military personnel and their families and recognizes the constructive role of many military officers and soldiers serving in Iraq. It also encourages continued prayer for peace and stability in Iraq, condemns in the strongest possible terms torture and abuse of prisoners, and calls for a mission plan to respond to the needs and concerns of our brothers and sisters in Iraq. Acknowledging the moral cloud surrounding the military invasion of Iraq, the resolution affirms the United States bears a legal and moral burden for the reconstruction of Iraq, working with the international community.