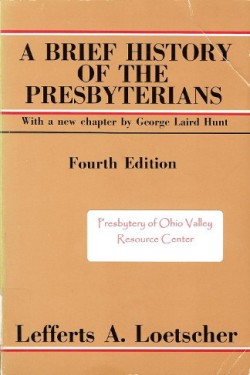 A review and summary of Christian Church history from the Presbyterian point of view. Its origins may be found in the early Church as described in the New Testament, says the author, only to be eclipsed as church government became increasingly autocratic. Consequently such representative government of a Presbyterian type as existed in the early church had to wait for the time of the Protestant Reformation in the sixteenth century to emerge again. Its history and growth from that time on, and an evaluation of its contribution to Protestant Christianity is the major concern of the most of the book, which concludes with a plea for the maintenance of what was central to the fathers of the Reformed faith, theological integrity, and fidelity in serving Christ with the talents and heritage the Presbyterian Church has received.

This should prove to be a useful book to members of the Presbyterian church, young and old, who wish to know more about the rock from which they were hewn.