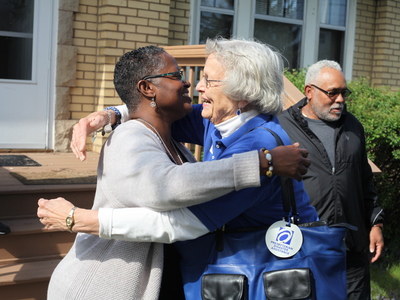 LOUISVILLE – The past year has been a challenging one for communities dealing with contaminated water supplies. Flint, Michigan has garnered national attention for nearly three years after improper source treatment caused lead from aging pipes to leach into the water. Between 6,000 and 12,000 residents have experienced a series of health problems including high levels of lead in the blood.

While millions of dollars have been pledged to replace the pipes, residents still hesitate to fully trust government to make good on its promise to clean up the water.

“Things are progressing slowly. For the average resident, it probably doesn’t feel like any progress at all,” said the Rev. Desiree Lawson, pastor of the Trinity United Presbyterian Church in Flint. “They’re still dealing with the water they don’t trust. City officials have urged residents to run tap water in their house faucets for five minutes a day saying the flow of water would help to eliminate anything that shouldn’t be in there.”

The city of Flint kicked off a Fast Start Program this summer and while the funds have been earmarked for repairs, the slow trickle of actual dollars has been frustrating.

“The program involves replacing lead pipes in homes that were most harmful to pregnant women and children,” said Lawson. “So far, 500 homes have had pipes replaced and the city is hoping to have another 800 completed this winter. But the issue of getting money in bits and pieces puts everything on delay. When we get $5 million in increments of the $25 million allocated, it delays the restoration process.”

Lawson says the people of Flint still rely heavily on bottled water for drinking, bathing and cooking and have begun to accept that they have been forgotten.

“It’s amazing how people can adjust to negative circumstances. When you have a list of things that you do everyday and on that ‘to do’ list is to get water, it sadly becomes normal,” she said. “They’ve made the adjustment.”

Lawson adds that Flint residents feel forgotten. “It just so happened that through the election, we were hot news. Every time we turned around, one of the presidential candidates was coming. But that’s died down now.”

Earlier this year, the Fresh Water Flint Committee began working with Presbyterian Disaster Assistance (PDA) on a short documentary on the water issues. The plans are to show the finished piece at the Second Annual Fresh Water Flint Festival on April 22 during a citywide screening.

“We’ve made our first production trip and conducted a series of interviews,” said David Barnhart, PDA associate for story ministry. “I spoke with a father who was visibly shaken as he described having to repeat things over and over to his 10-year-old son, because his son didn’t understand.”

Experts say lead enters the body and can manifest itself in different ways, from developmental delays to behavioral issues and organ failure. It’s estimated that more than 100,000 men, women and children have lead in their system in the Flint area.

A social worker interviewed for the film said, “I once heard someone refer to the children who had been poisoned as ‘lead people,’ and it made me furious. We find a label for people and dehumanize them so that we can ignore injustice, and then conveniently move on with our lives. We, as a nation, cannot ignore what is happening in Flint.”

Lawson says Flint residents are cautious about getting too enthusiastic about 2017. “The angel said to Joseph, ‘Do not be afraid’ but we are afraid because of the uncertainty of what will happen. But the people are determined to get back on their feet and churches are coming together in a way that’s never happened before and it’s happening across denominational lines.”

“There are a lot of people that are seriously working and fighting for Flint because they believe it can be restored,” said Lawson. “If the money arrives and we get new pipes, hopefully, we can begin to trust again because now, there is a lack of trust.”

Two years ago, authorities discovered a known carcinogen, Perflorooctanoic Acid (PFOA) in Hoosick Falls, New York, a small community of approximately 3,500 people. PFOA was once used in the manufacturing of non stick coating such as Teflon. The source of the contamination was traced to a factory owned by Saint Gobain Performance Plastics, according to the Environmental Protection Agency.

Earlier this year, PDA deployed a National Response Team to meet with pastors and other church leaders after it was discovered that the contamination had reached municipal wells in addition to several private wells. But local church leaders now say progress is being made to clean up the water.

“Tests from a temporary water filter show that it is removing the PFOA or bringing it down to a safe level,” said the Rev. Donna Elia, pastor of First United Church Presbyterian. “City officials have been delayed in putting the permanent filter in but I understand that will happen in January.”

Even though the levels are down, Elia says blood tests are still being offered to people and bottled water is being given to those who want it.

“Kudos to PDA because we are the only denomination that came and responded. Because of that, other church leaders have had access to pastoral care and participated in long-term problem solving,” said Elia. “Our denomination became a focal point because PDA was there for us.”

Elia says the people of Hoosick Falls are resilient and have “sort of moved on.” It still concerns residents and they are watching out for their health and well-being, but it is not in the forefront of their daily lives now.

“The community wants to be known for its strength. People were glad the attention was placed on the problem but it’s time to move on,” she said. “There’s a movement called ‘Hoosick Rising’ and emphasis is being placed on the strength, resilience and sense of community.”

Elia says the water tests won’t show it, but people who have had blood tests do show elevated signs of PFOA. “Anywhere from 10 times to several hundred times the allowable amount. What we don’t know is whether that’s an indicator of future illness. That’s the great unknown.”

“As a country, we need to recognize that all of our water systems are vulnerable,” said Barnhart. “We need to work together to protect and value the source of life that it is.”

For more information on what PDA is doing in connection with the Flint water crisis, click here.

To read the original article on the Presbyterian Mission site, click here.

To submit news articles send the details to Rhonda Seymour