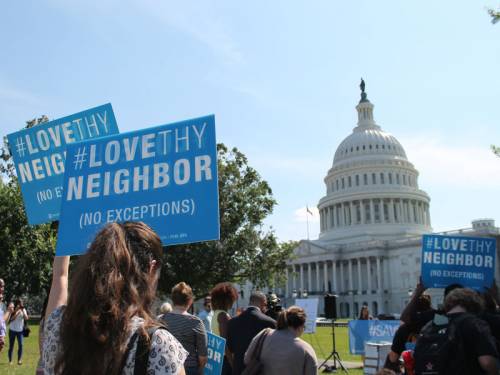 Interfaith leaders and supporters spent 23 hours in front of the Capitol speaking out against the latest health care proposal currently under consideration. Photo by Ray Chen.

LOUISVILLE – For 23 hours, a group of interfaith leaders from a variety of denominations gathered on the lawn of the U.S. Capitol building on Thursday to pray, sing and speak out against the Senate and House versions of a new health care bill. The group described the Better Care Reconciliation Act (BCRA) as “a greatly flawed bill” that was being rushed to approval before there is a thorough examination of its contents.

The group included Muslim and Jewish leaders as well as Christian faith leaders such as the Rev. William Barber, president and senior lecturer from Repairers of the Breach, the Rev. Jennifer Butler with Faith in Public Life and the Rev. Jimmie Hawkins, director of the Presbyterian Church (U.S.A.) Office of Public Witness.

The group urged people to advocate and take action to protect Americans who depend on Medicaid coverage for their health care.

“The BCRA does not achieve the goal of universal health care for all Americans. Physicians take a vow to ‘do no harm,’” Hawkins said. “This bill does far more harm than good. The Congressional Budget Office predicts that over 22 million people will lose coverage.”

Hawkins says the bill would create enormous tax breaks for the wealthy, roll back Medicaid expansion in 31 states, block Planned Parenthood funding for one year and end the coverage mandate for both individuals and employers. 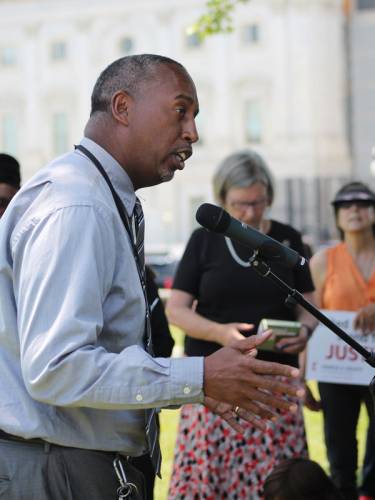 Rev. Jimmie Hawkins, director of the Office of Public Witness, speaks to the crowd in the final hour of the 23-hour vigil on Capitol Hill. Photo by Ray Chen.

“This must be a right of citizenship in this country, that if your child gets sick, you don’t have to hesitate in taking him or her to the doctor because you don’t have the ability to pay. Our Christian faith compels us to have a heart for the sick,” Hawkins said. “The Parable of the Good Samaritan gives an example of proper health care and going out of our way to help someone with serious health issues.”

The Office of Public Witness helped plan the vigil, which began Wednesday at 4 p.m. and continued through the night. The gathering closed Thursday afternoon with comments from Hawkins and others.

“How can Paul Ryan stand before the American people and say this is an act of mercy? This is not merciful. We as people of faith serve a God of justice, passion and love,” Hawkins said. “We have to keep coming back and let the lawmakers know that we will not go away. We will be here to the end.”

To submit news articles send the details to Rhonda Seymour