More help will materialize once deadly fires are out 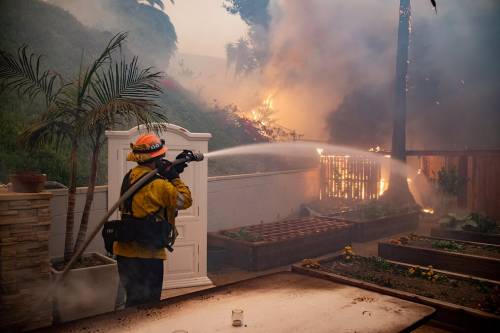 A firefighter sprays water as part of efforts to put out fire in Southern California. (Courtesy of Los Angeles County)

LOUISVILLE – While the deadliest fires ever to strike California continue to burn, Presbyterian Disaster Assistance has deployed four National Response Team members to Southern California, where residents are enduring both a mass shooting and the Woolsey and Hill fires.

They’re serving as Disaster Spiritual Care Providers, working in American Red Cross shelters in Pacific Palisades and the San Fernando Valley. In the wake of the Camp Fire, PDA has approved an initial $7,500 grant to the Presbytery of Sacramento; grant requests are also anticipated from Santa Barbara and Pacific presbyteries, said Jim Kirk, associate for PDA’s National Disaster Response.

Together with the Rev. Jim Kitchens, transitional executive presbyter for the Presbytery of Sacramento, Kirk worshiped Sunday at Bidwell Presbyterian Church in Chico, Calif., a half-hour west of the nearly destroyed community of Paradise, Calif.

“Chico didn’t lose any property, but a number of members who lived in Paradise lost their homes,” Kitchens said.

“I deeply understand the kind of trauma that living through a fire brings to a congregation,” he said Tuesday. “There is some pastoral sensitivity I try to take with me, knowing what old traumas can trigger in people. Clearly this was a church in shock.”

“The Camp Fire is truly historic,” PDA’s Kirk said. “Everybody is going to know somebody” impacted by the fire, which had as of Tuesday killed 42 people and led to 53,000 people being evacuated, according to the Federal Emergency Management Agency.

With fires still raging in both Northern and Southern California, it’s unsafe for PDA personnel to travel currently in the impacted areas. “We are early responders, but not first responders,” Kirk said. “Our goal is to stay out of the way. Once it is safe and appropriate, PDA can come in to work with presbyteries and congregations to develop response plans.”

In the Presbytery of Santa Barbara, fires ignited Nov. 8, a day after a gunman killed 12 people in a country music bar in nearby Thousand Oaks. “The fires are a way of life, unfortunately, but shooting is not,” said Sandy Thoits, Stated Clerk of the Presbytery of Santa Barbara. “People who are grieving had to be evacuated.” To date, 84,000 people have been evacuated because of the Woolsey Fire, which as of Tuesday was responsible for two deaths and three injuries, according to FEMA.

PDA expects to approve a grant in support of people affected by the violence.

The Rev. Dr. Kate Wiebe, a pastor at large in the Presbytery of Santa Barbara and the executive director of the Institute for Collective Trauma and Growth, is working with people hurt by tragedies of both fire and violence.

“The shootings and the fire occurred within 24 hours. For those folks, they are very entwined, so you can’t separate it out,” Wiebe said. “People are overwhelmed and distraught. They’re experiencing a wide range of emotions and reactions.”

Mass shootings “bring out issues of blame and anger in a way that natural disasters don’t always do,” she said.

Like firefighters who are increasingly called upon year-round to battle fires in the wildland urban interface, second responders like Wiebe are seeing less and less down time.

“In terms of groups being stretched thin, many disaster response groups find it difficult to find mental health and spiritual care providers,” she said. “They are needed in so many places right now.”

Indeed, Kirk said, presbytery staff in parts of fire-affected California “say that they are starting to have conversations about this may be the new normal” because of factors including climate change and drought. “This is raising a lot of concern for people who have to live in areas where fire is possible.”

“I hope the denomination will be prayerful and generous,” Kirk said, “in their support of our Presbyterian family who are still in harm’s way.”